I woke up early and started checking the weather because I wanted to start getting down toward Victoria where Julie would be flying in the next night. That weather was not looking good with strong winds and thunderstorms forecast. I called the flight service station and told the briefer where I wanted to go and ask for a abbreviated briefing because a full briefing takes a very long time and includes all kinds of details including practically if any light bulbs are burnt out at nearby airports. That briefer said “you want a abbreviated briefing? No way in hell! How’s that for an abbreviated briefing?” We both laughed and then he explained to me about the winds low clouds and thunderstorms in the mountains. We discussed options and I decided that I might have a chance to make it down to Kamloops if I left soon and that would put me in a slightly better position to try and get farther south the next day.

I got right over to the plane and started packing up for the flight. A nice older guy came by the plane and introduced himself as the airport manager. I started to tell him something about myself and the plane, he interrupted me and said he knows all about me and said “he thinks he’s the only person I had not met yet.” He then drove up and down the runway to make sure there were no birds or Canadian geese on it and I took off and headed South.

There were certainly a lot of clouds around but it was very passable. When I got to Kamloops Lake it looked like I could keep going South and make it pretty far, but I had not found my paper map for the next leg and I was not going to go in the mountains just a relying on the GPS unit so I went and landed at Kamloops for the night. Getting that map turned out to take an enormous amount of time and effort that I won’t bore you with, but I finally was lucky enough to have someone bring me one from their home the next morning just as I was ready to leave.  I was not going to leave without it in my hand and I was getting pretty nervous that it might delay me a whole day just trying to find that map. 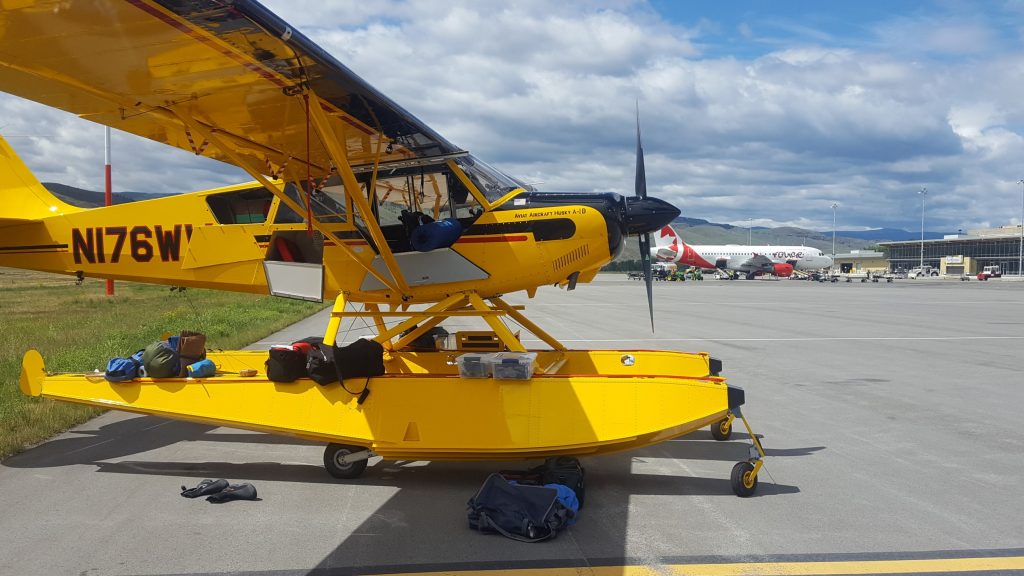 I spent the rest of the day hanging around the plane on the ramp, I had quite a few visitors come by to chat about airplanes and flying including some of the  airline pilots.