I checked the weather online and then called flight service for another personal briefing. This time a different briefer and kind of a smart-aleck answer to my request for a briefing of going from my location to Victoria. He said ” to try and get to Victoria today, first answer is no, second answer is no and come to think of it,…….yes third answer is also no!” He then proceeded to tell me about the thunderstorms, low clouds, very strong turbulence and rain along my route that would make it impossible. I tried to ask a few questions and he just said, “I know you really want to go and you are trying to think of some way to make it alright but it is not going to be.”

So, I took my map and headed out to see for myself.  I’m comfortable with a exploratory excursion as long as I know I have super solid backup options and with the floats, I could use an airport or a lake (but with strong winds water would be hazardous). The first leg where I left Kamloops headed west and then down south towards the mouth of the Fraser River Canyon went pretty well, it was definitely windy with off-and-on rain showers but the cloud bases were quite consistent at 2000 feet above the river and they did not seem to be looking like they were going to drop down behind me. 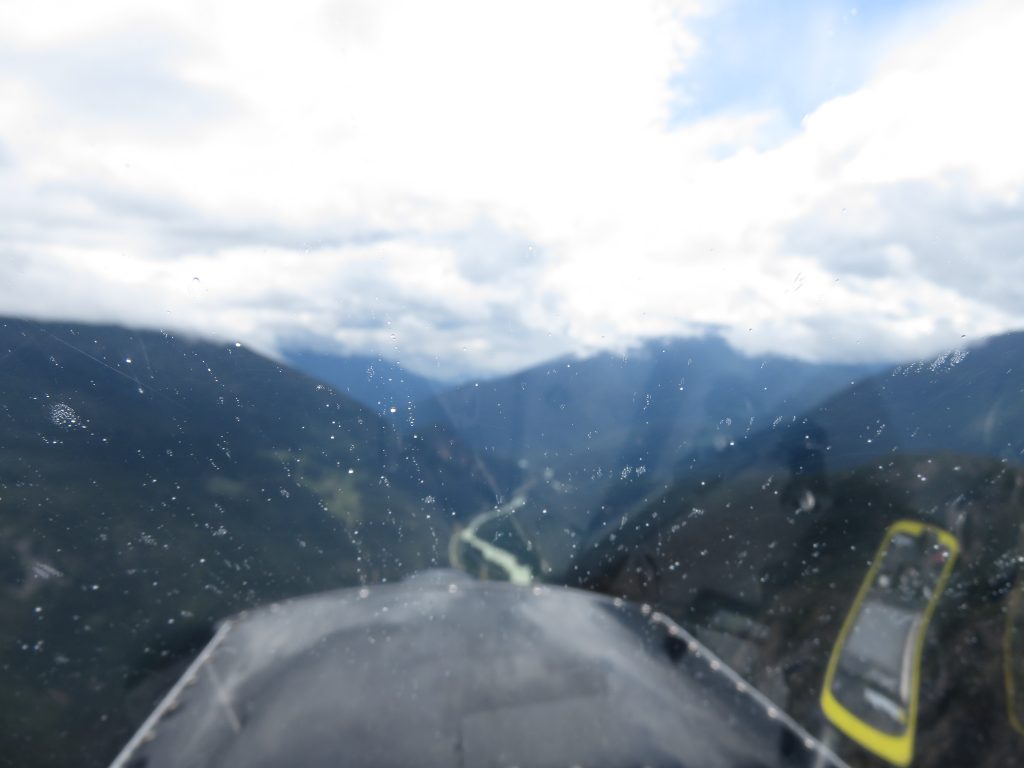 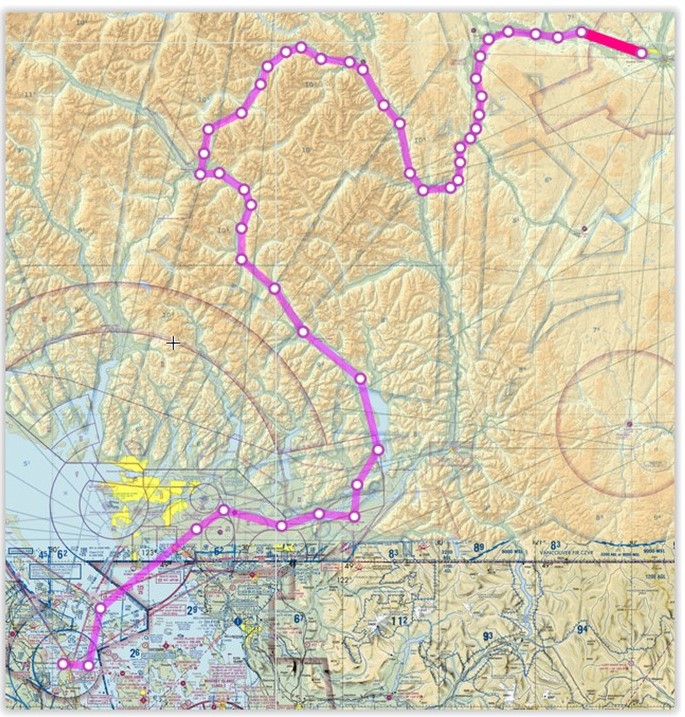 I knew I had my next stopping point airport just about 20 miles up river (Lillooet) and that leg went well (It was just very turbulent). I did get to see a rainbow below me during that leg. 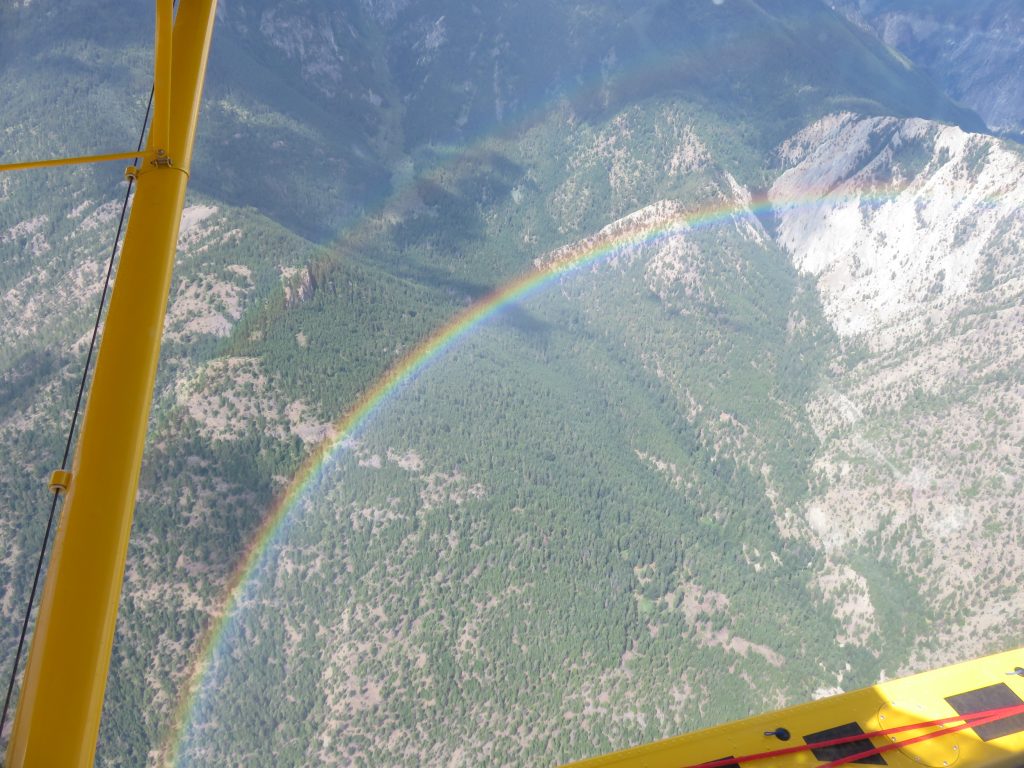 Rainbows occur when the sunlight is coming from behind you and when you’re flying that means that rainbows are beneath you when you fly through the rain and get a shot of sunlight. As I passed the Lillooet Airport I had enough cell tower strength that I gave Julie a call with my phone plugged into the intercom system. It was fun to have a chat with her and share that I still really did not know if I would make it to Victoria that night, but if not, I would probably make it the next night.

As I headed to the West the turbulence really picked up and I got a lot of head winds. The predominant wind was coming from the West and funneling in through the valleys. I then stopped at Pemberton Airfield to get some gas before I made the run South toward Chilliwack. The strange thing there was I was getting bounced around like crazy all the way down to treetop level and I couldn’t believe the windsocks were just hanging down, but all the wind was only above the trees. The flight down to Chilliwack went okay, a lot more rain and now there were low clouds scattered around, but they were easy to navigate. 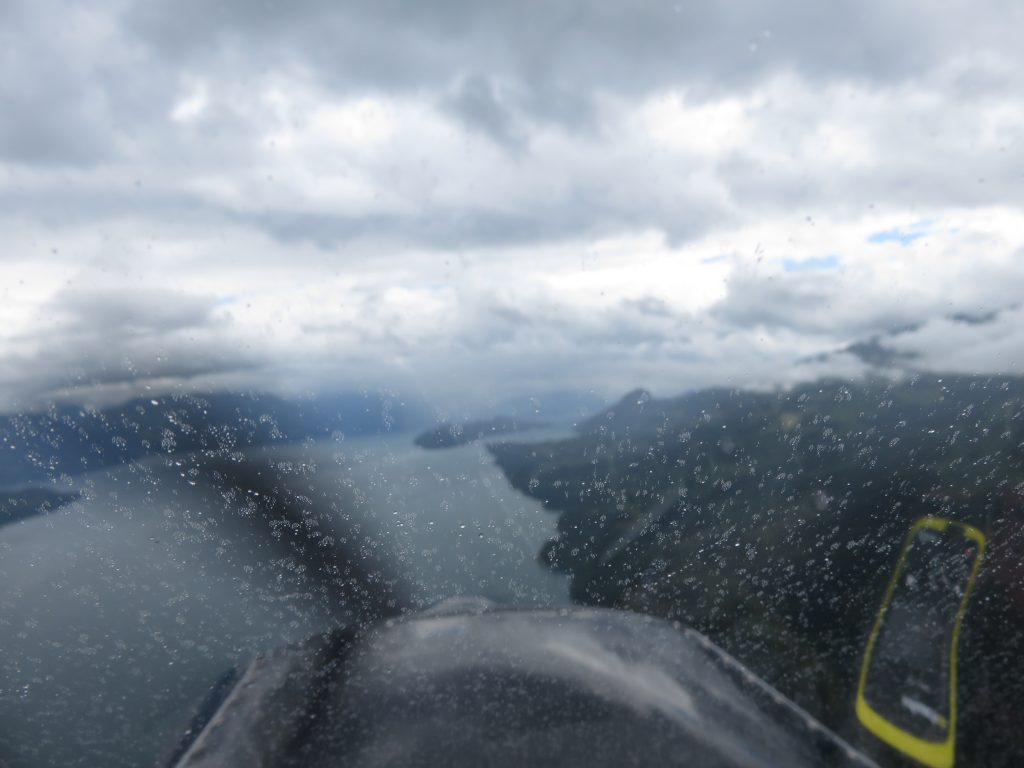 As I came out the valley into the open flat land with Chilliwack in the distance visibility was fabulous and the clouds were much much higher, I could tell that I would be making it to Victoria that night. I stopped at Chilliwack just to stretch my legs and get my head around the radio frequencies for the next leg, it was quite windy, my airspeed indicator was saying 35mph when I was parked!

The map for Victoria was quite complicated and there were a number of routes I could possibly go.  I called Vancouver approach control on the phone and spoke to one of the guys their because I wanted to learn the preferred method and I like to be with flight following but it wasn’t clear to me, who I would be talking to, when. He was quite casual and agreed that the maps are very confusing. Basically his theory was avoid as much as you can and talk to as few as you can. I headed out carefully navigating around mining and blasting areas and some restricted areas. I called up some control towers along the way just to advise them I was possibly in their airspace as I passed by and they did not seem very interested, they even bounced me back and forth between them both saying I was closer to the other ones air space and then cut me loose as soon as they had a chance. Even Victoria approach control told me that I was calling them too early and to call them again when I was a lot closer. Everything went quite smoothly and I was very excited to get into Victoria, get the rental car and check into the bed and breakfast so I would be ready to pick Julie up later that night.