When I got up the radar was showing a big band of thunderstorms and rain moving through to the North and it looked like it would not give me a break until after 11 so I took my time and ran some errands. Out at the airport the Flying Club was setting up to have a air show the next day. I took my time straightening things up and organizing with the plane and visiting with a lot of people that came by to admire Double Shot.

When I took off there we’re still many layers of clouds in the valleys and occasional rain showers as I headed up toward a big North – South lake called Adams. About a third of the way up it really looked like the clouds were packing in the far end of the lake and I thought there was a good chance I would not get up through the saddle to the next valley. I went back a little ways and took a side valley to the West where I found less clouds and started to turn Northwest, but I still had a lot of clouds ahead of me so I landed at a nearby lake ( East Barrière Lake) to take a break. I found a little beach to tuck behind out of the wind and have lunch. 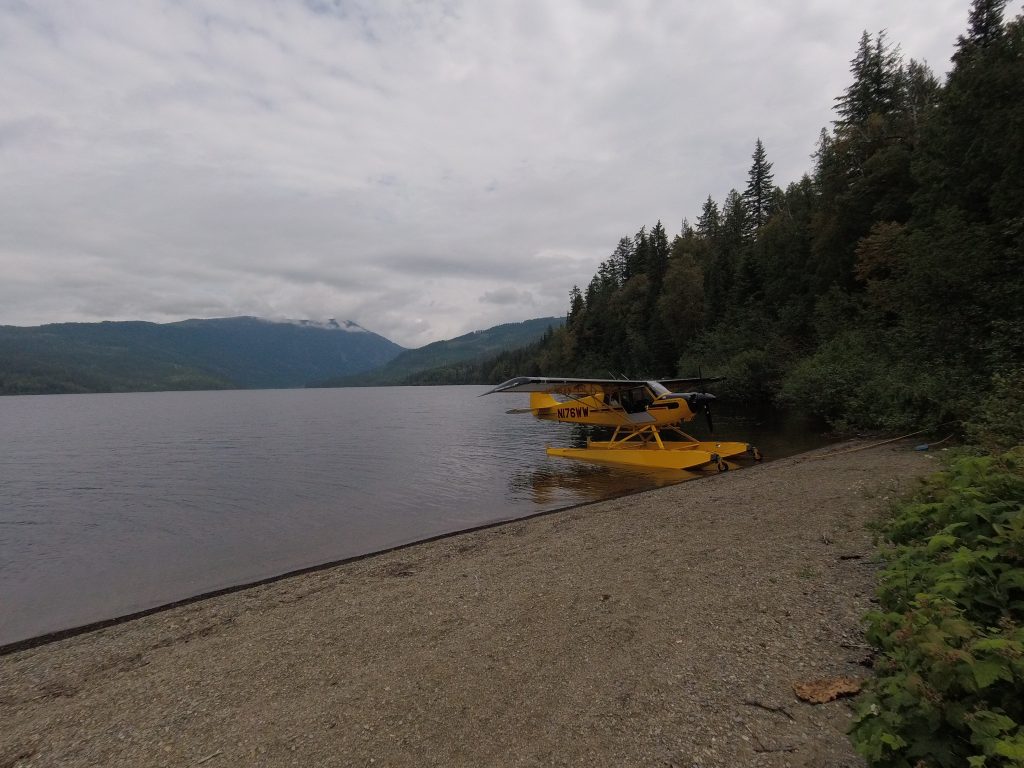 I took off and headed west out over the North Thompson River Valley. It was breathtaking to come out over the mountains and to be so high above the deep deep valley –  it looked like something from Switzerland. Also the river had an enormous amount of water and power coming through it it was fascinating to watch from the air.

As I got farther up following the Clearwater River it, too, was amazingly powerful with an extremely large volume of water. It has many waterfalls and rapids.  One of the biggest is Helmcken Falls.  It is 460 ft. straight down. I continued up to Azure Lake and it was gorgeous.  The only problem was a lot of wind was coming up the gorge and it made my landing choices very difficult. I had looked at the lake many times on satellite but to be there in the canyon with the cascading rivers coming down the mountain faces from the snow and even one glacier above was awesome! I did land and tuck into a little cove out of the wind but it was difficult to find a place for the plane. I was very worried about the strong winds pushing the plane into the rough rock and tree-lined shoreline all around if I had any problem starting it. 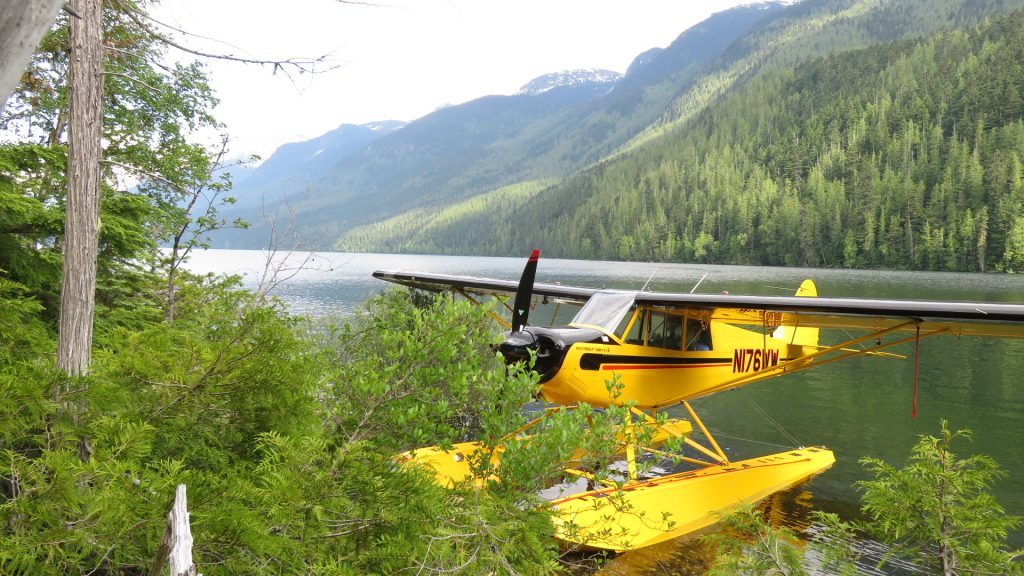 From there I headed down to 108 Mile House to get some fuel and check into the bed and breakfast that Julie had texted me was waiting. It was over an hour flight and had quite a good deal of turbulence along the way. I taxied up to the pumps and while my mind was focused on the pumps and what I was going to do next, my left hand was shutting down the plane and flipping off switches on the panel.  To my shock and surprise, I flipped the landing gear switch and retracted the landing gear up into the floats dropping the plane and the floats onto the concrete. 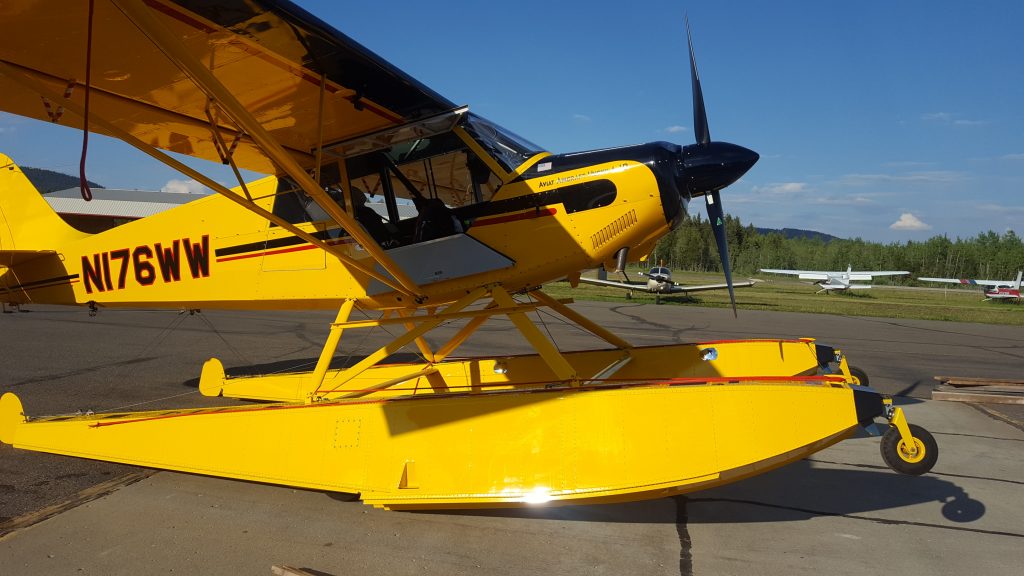 I walked over to a big hangar that I saw open and found several fireman inside. I told them I had done something really stupid and would very much appreciate some help. They were fabulous. I asked them for blocks of wood and a floor jack and they started gathering up big planks of lumber and marching to the plane. 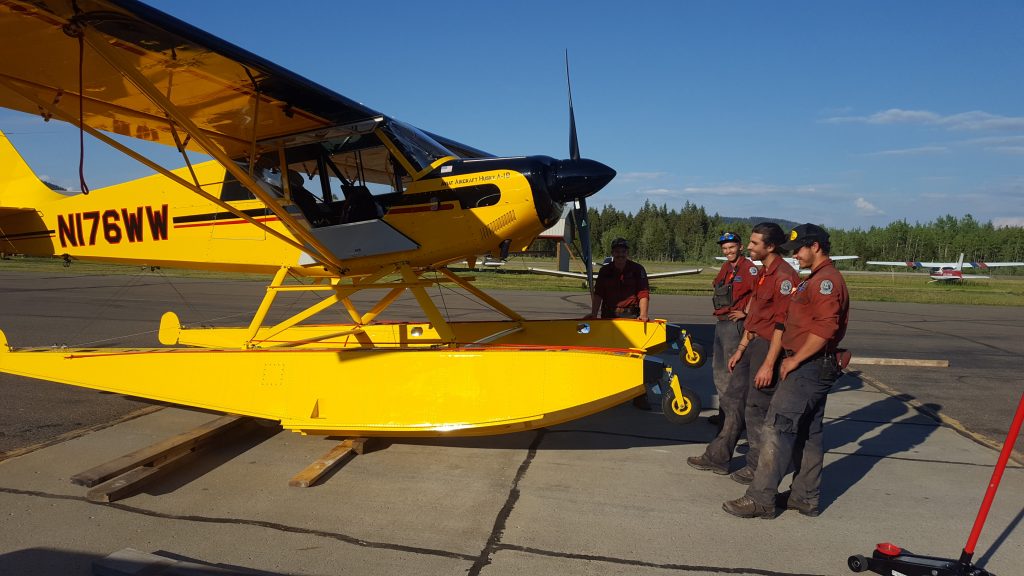 I directed them on lifting up one end of the plane and then the other as I kept adjusting boards under the floats so we could kind of teeter totter it back up into the air. It actually worked and I got the gear back down with only cosmetic damage to the floats!