After a great night’s sleep I made myself a hearty breakfast and began straightening and packing up. 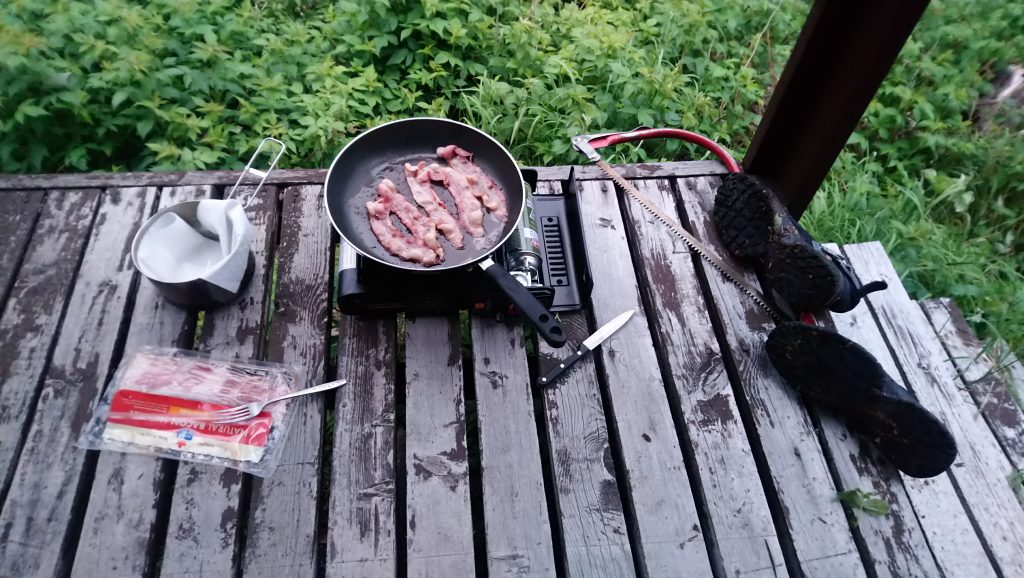 I did some extra clean up on the cabin and left some supplies there for Willie. It is amazing how long it takes me to get things packed up and in the plane. 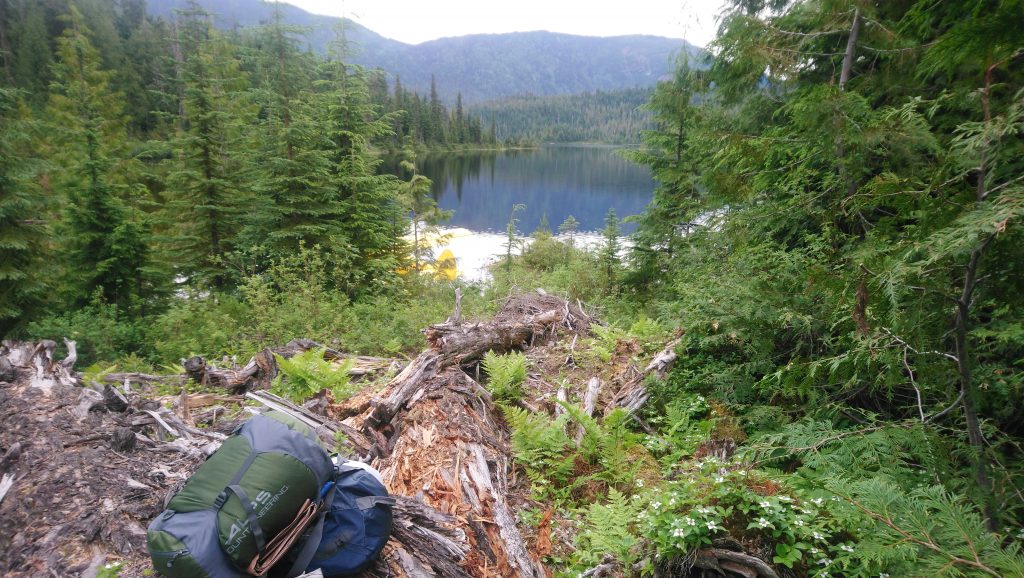 When I finally got going, it was just a gorgeous lake to fly out of. As you can see in the departure part of the video on yesterday’s report, right after takeoff you are already almost 2,000 feet above Quesnel Lake. I descended down to about 800 feet above the lake and continued West. I did not have a agenda I just was planning on ending up at Crooked Lake for some fishing. I noticed a beautiful river inlet with a beach and a waterfall up above that looked like a great spot to fish so I dropped down and did some fishing there. 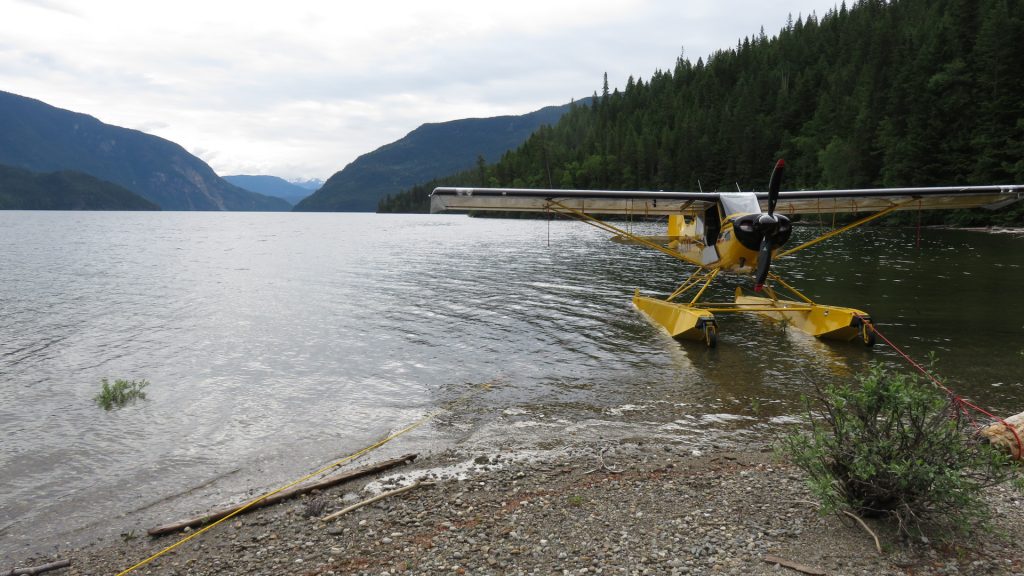 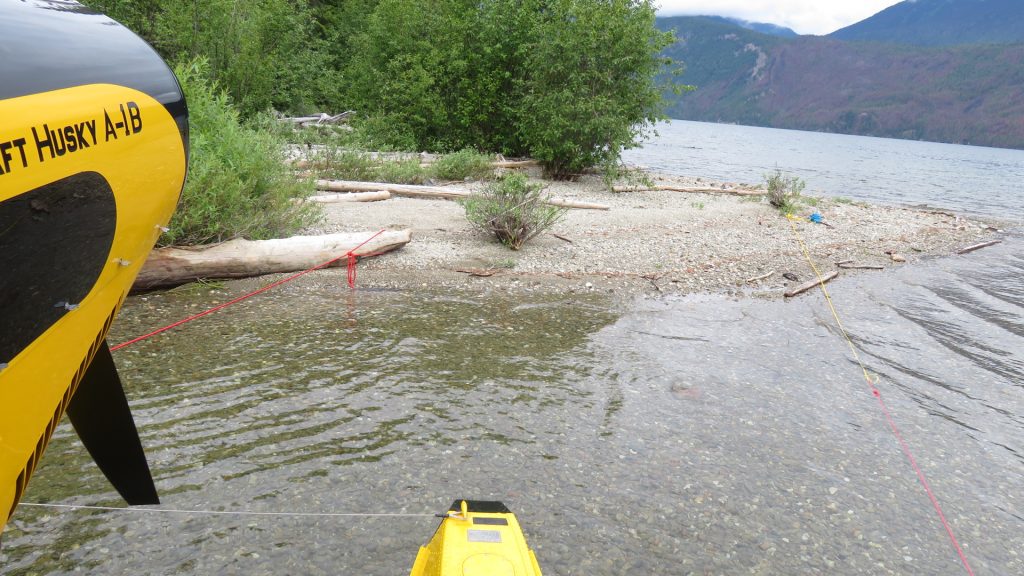 The fishing was great.  I not only was catching large rainbow, I also caught a very large brown trout. I then continued flying down the lake and exploring other side river inlets. I did not choose to land at another one, but I was really enjoying the gorgeous sightseeing and low-level flying around the shoreline. I then started in the direction of Crooked Lake but there was a big black rainstorm between me and that valley so I flew around horsefly lake looking for a another place to fish. A few times when I would see a protected river Inlet and go down low to take a close book I would find either a small tent camp or someone with a small boat tied up there and fishing already. So I headed farther to the southwest and circled around the rainstorm to get over to Crooked Lake. I noticed some type of a lodge at the far West end and about five miles down at the other end of the lake there was a gorgeous large river inlet delta where I landed and dropped anchor. Fishing was good for small rainbows but it wasn’t long before that big rainstorm got to where I was and I dragged the anchor into quite shallow water before it hooked up on something. I waited out the rain storm and moved back out after finally getting and enormous tree branch unhooked from the anchor. I did some more fishing and drifting and another smaller rain storm came through. Then I noticed a small boat with two guys had come all the way down the lake and were coming right up to me. They asked if I was okay and I said of course just fishing. They explained that my wife had called the resort because my satellite tracker was not sending any data and she was worried about me. I thanked them for making the very long trip and told them I at least owe them a lot of of beer and some gas. They were extremely nice and said they were just happy that I did not have any problem and was enjoying fishing. I asked them about the resort and if there might be a room, they thought so and I packed up and flew down to the resort. I met the owners, Kim and Al, at the shore and they said they had a small cabin for me. 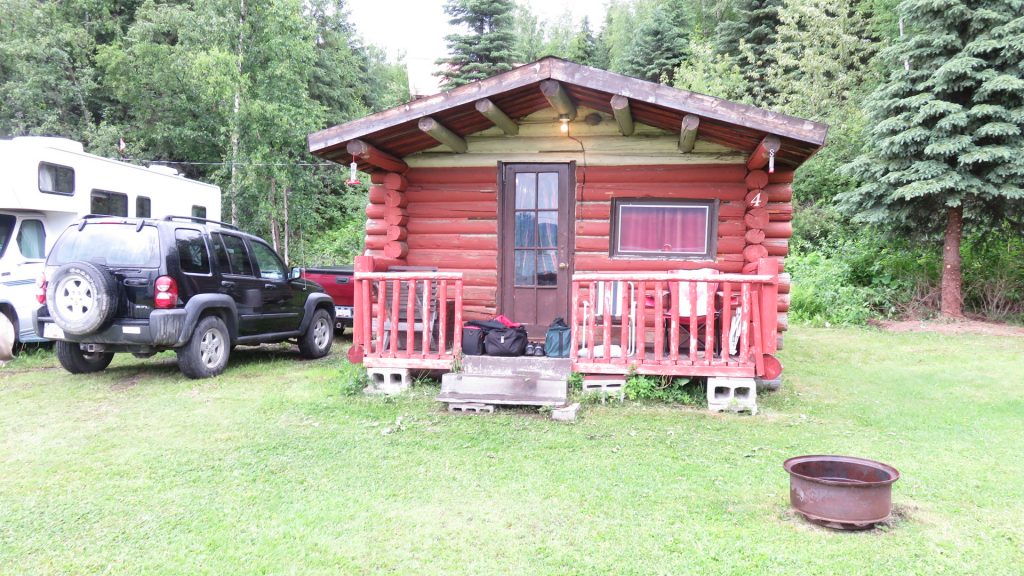 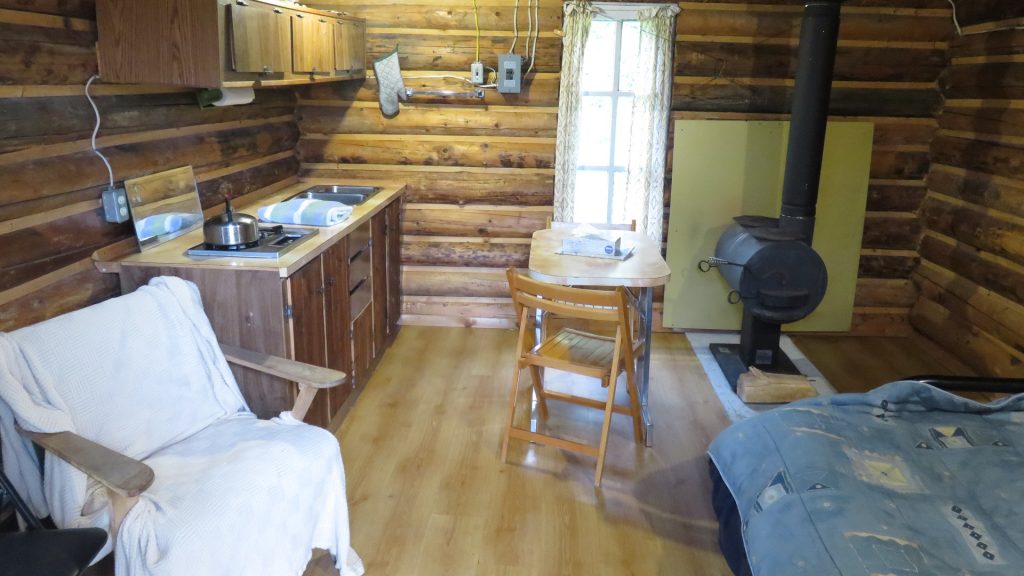 I then spent a long time unloading the plane and getting it secured for the night because there were more strong wind rain storms passing through. 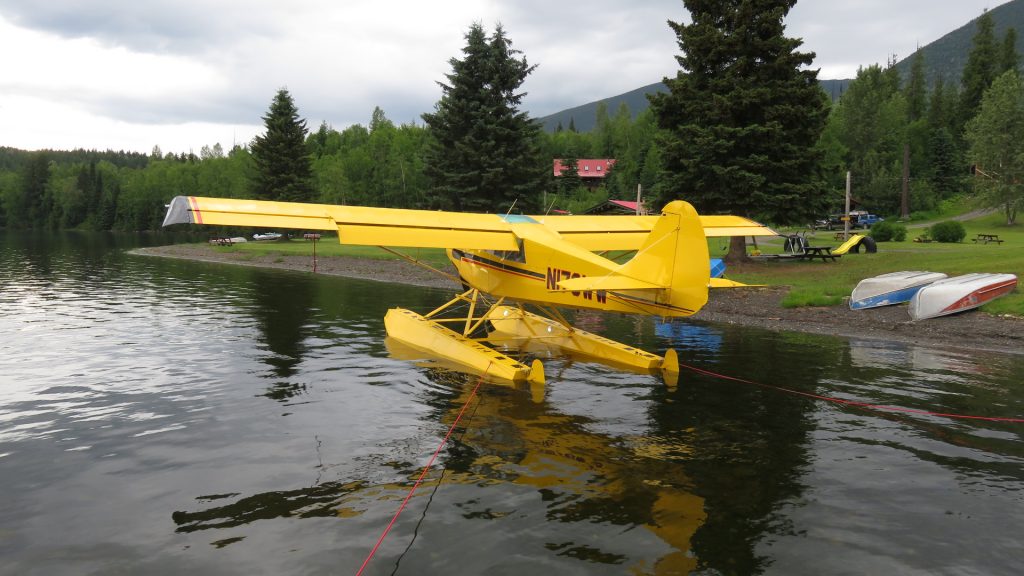 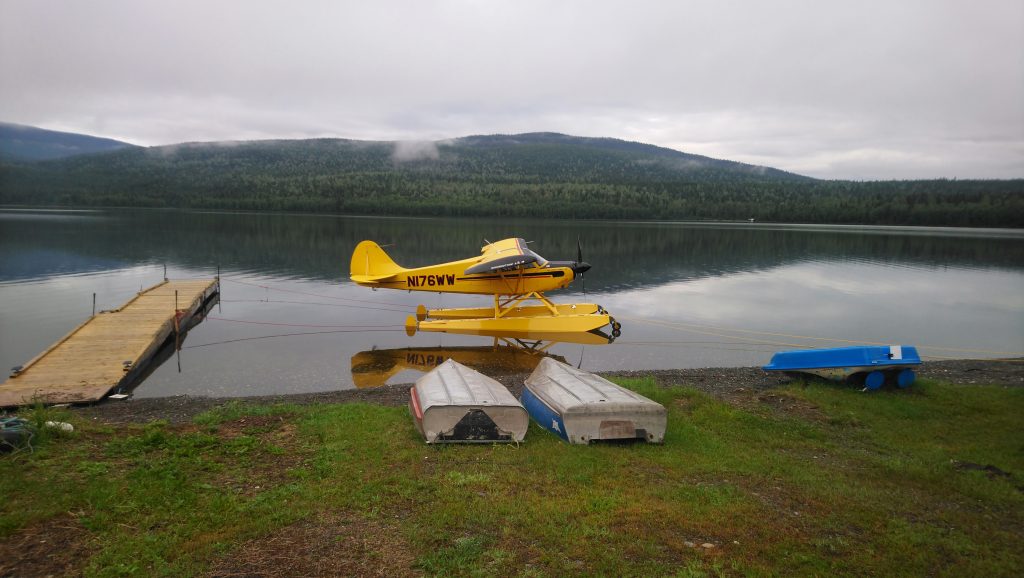 Kim made a fabulous gluten-free dinner for me and I had a great time visiting with her and Al. 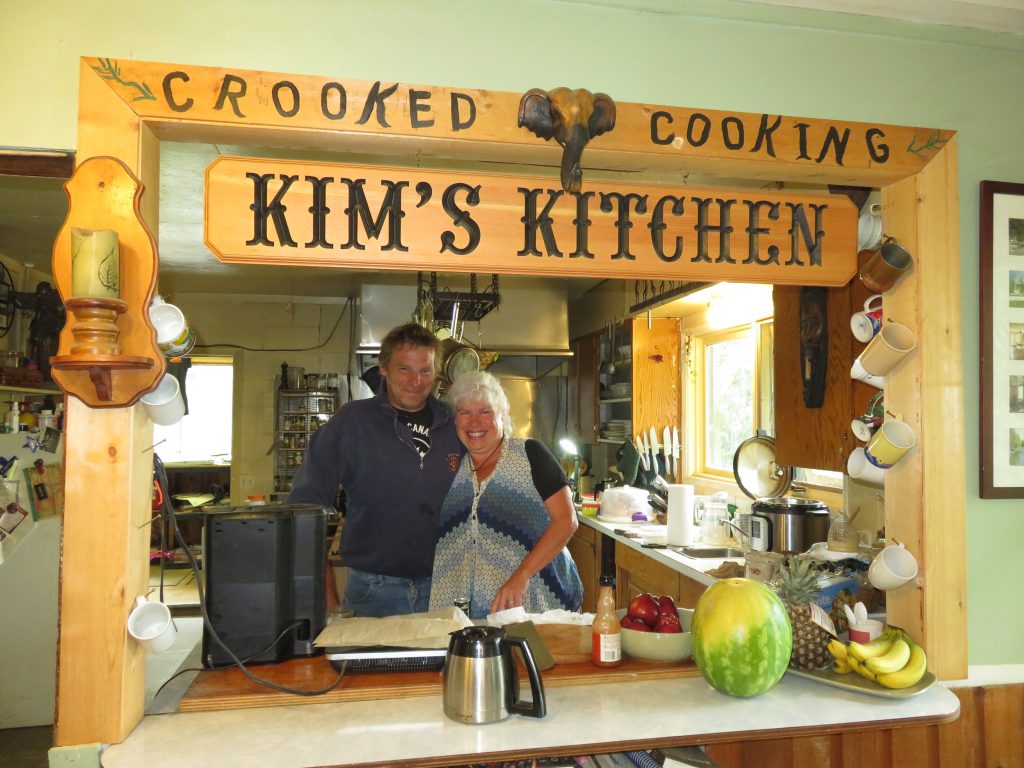 We then went down and hung out around the campfire telling stories until almost midnight with the two guys that came to my rescue. 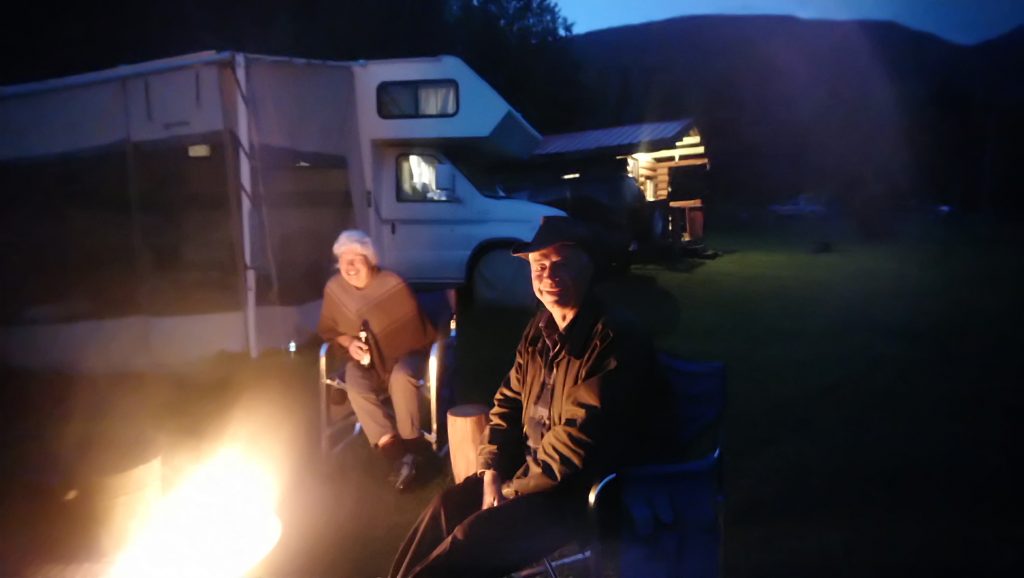 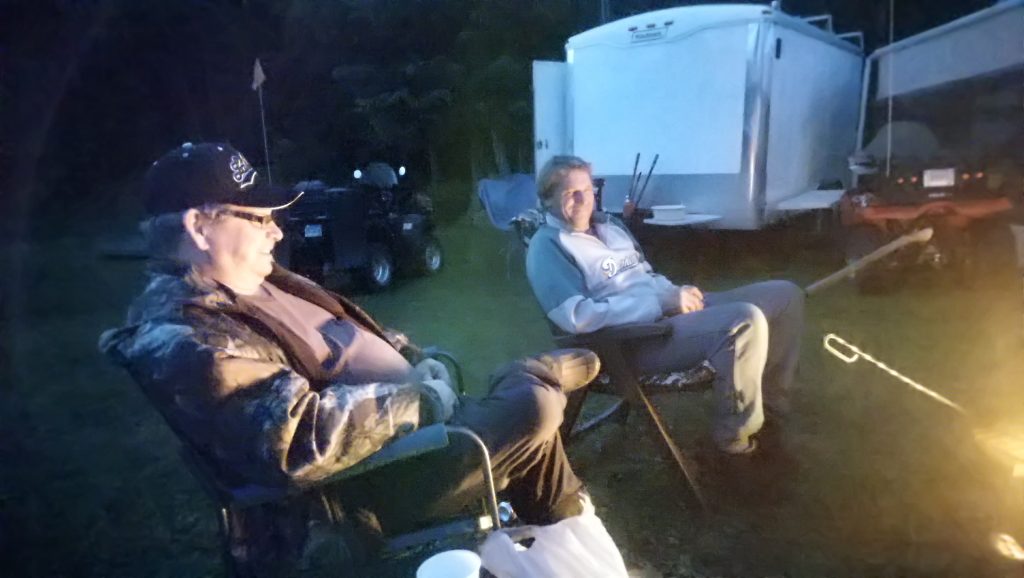