Well, back over at the plane I met even more people.  All the pilots were very friendly and full of advice. One of them, Willie, was especially amazing. He is a float-plane pilot that used to fly charter in the area and has a private cabin on a remote lake. He told me I was welcome to go out and use his cabin! He showed me some pictures and it looked nice. He drew a little sketch of how to fly into the lake where to park and where the rocks are hiding just under the water surface. He also told me about some of his other favorite lakes, a few of which were close by and one had also been recommended by Mike the day before. Based on that I decided I would be going out to Lang Lake and he said there is a forest service cabin there that I could use also.

Weather looked good.  I had not only checked it myself, but I had spoken to the flight service station personnel and they told me it would just be some very light rain and not much wind that day. I found a nice little spot to tie up where a creek was coming out and where I was protected from the wind that was coming down the length of the lake.

I did some fishing and was catching rainbow trout and squaw fish (a boney fish that is very oily (my net still smells),(a week and 6 feet away). Next thing I know, I hear thunder and see lightning in the distance across the lake! It started raining and I put more rocks on my anchor line and put out a second line but I was still pretty well protected from the wind coming down the lake. I was having some lunch in the cockpit and trying to wait out the storm that had a lot of thunder and lightning when I noticed the bushes on the shore all lay down in a strong wind. The wind was now coming directly across the lake and hitting the side of the plane wanting to push it back into the trees and shoreline behind it. I jumped out and held the line to keep the plane from getting blown back into the shore but all I could do was ball up in the wind and rain to keep as warm as I could but there was no way to let go or move to get a different line out and no trees or anything in the right direction that I could tie to. I was balled up there holding that line for over a half hour hoping that the wind would not get any stronger and finally it began to lighten up. I was able to work my way back to the plane and get a hold of the second line so I could get the plane offshore by wadding out with it and across the creek and pointing it more into the wind so that there was not so much force pushing on it. 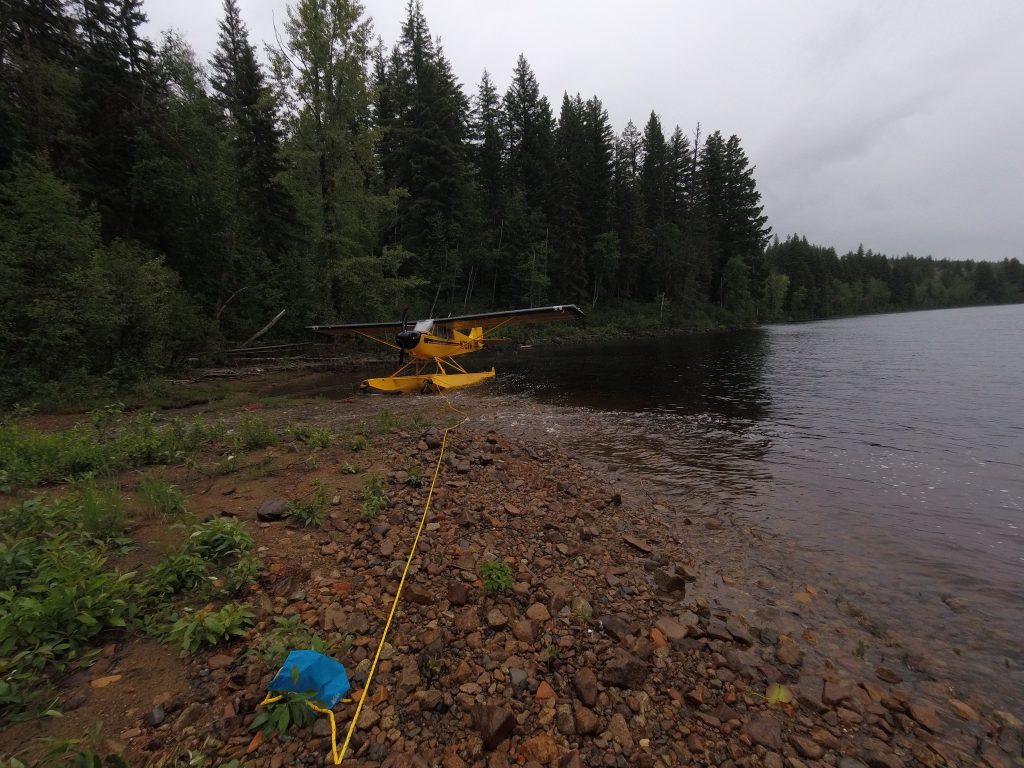 The wind continued to die down over the next hour (that’s how I got the above photo). I was quite cold and soaked and decided to taxi the plane down the lake and check out the forest service cabin.

It looked like it would provide shelter but that was about it. 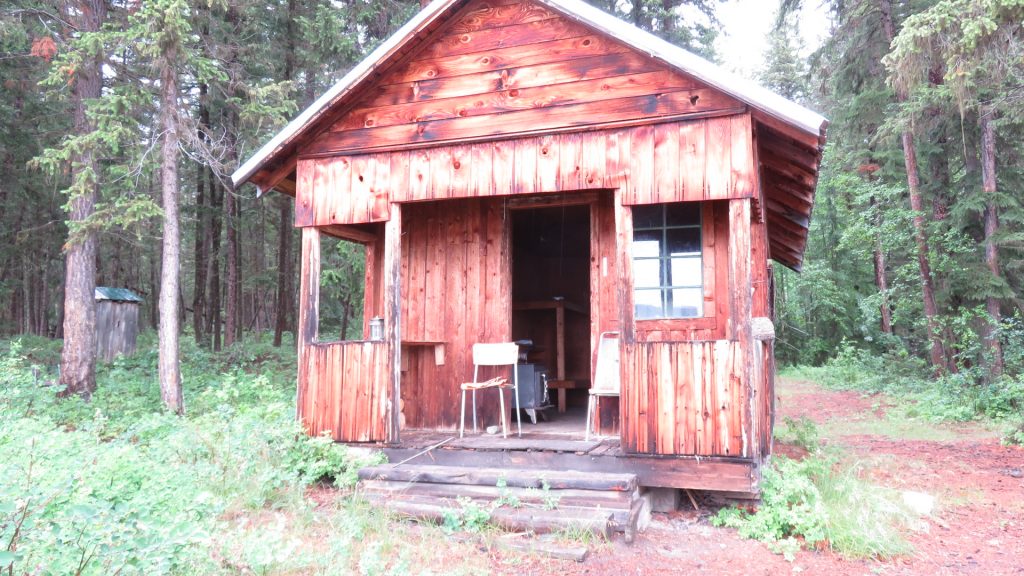 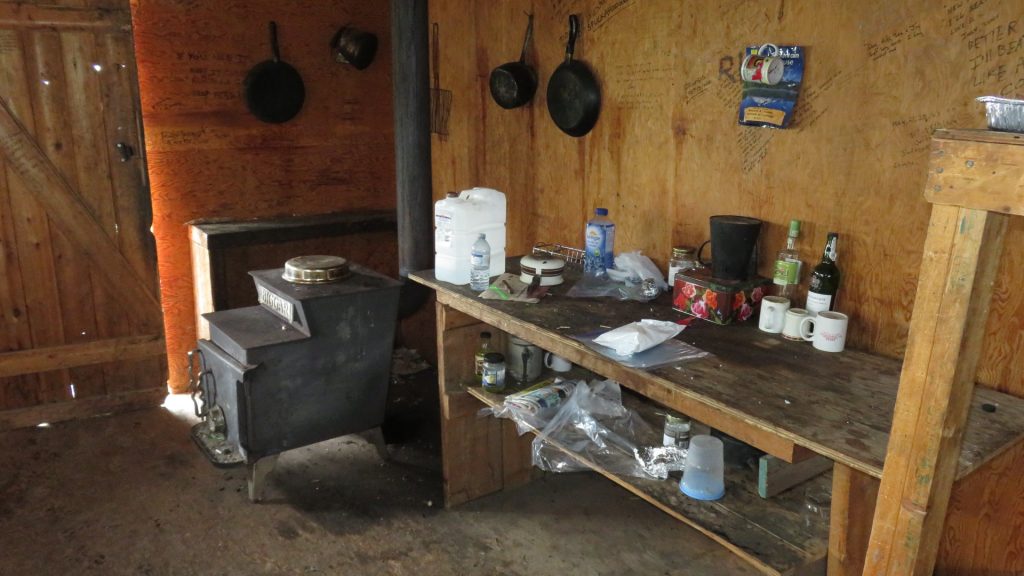 There was a little bit of firewood but nothing to split it with. I always travel with basic emergency camping gear so I figured I would pitch my tiny tent in the cabin (that should keep the rodents and mosquitoes off of me). The rain was lightening up.  Finally after about an hour I could see the cloud ceiling lifting to the West at the other end of the lake. After a little while it looked like I could get past some of the clouds down there so I packed up and took off. It worked out well.  I made sure I always had a place to turn around and go back or land on another lake and I found my way through the low clouds and back to 108 Mile Airport. I loaded up the things that I had left in one of the guy’s lock-box and flew down to 100 Mile Airport, that is pretty much on the Main Street in the center of town. I got a fabulous room at half the price of what I paid the night before and I had a good hot meal at the “Gourmet Burger Rednecks” restaurant. 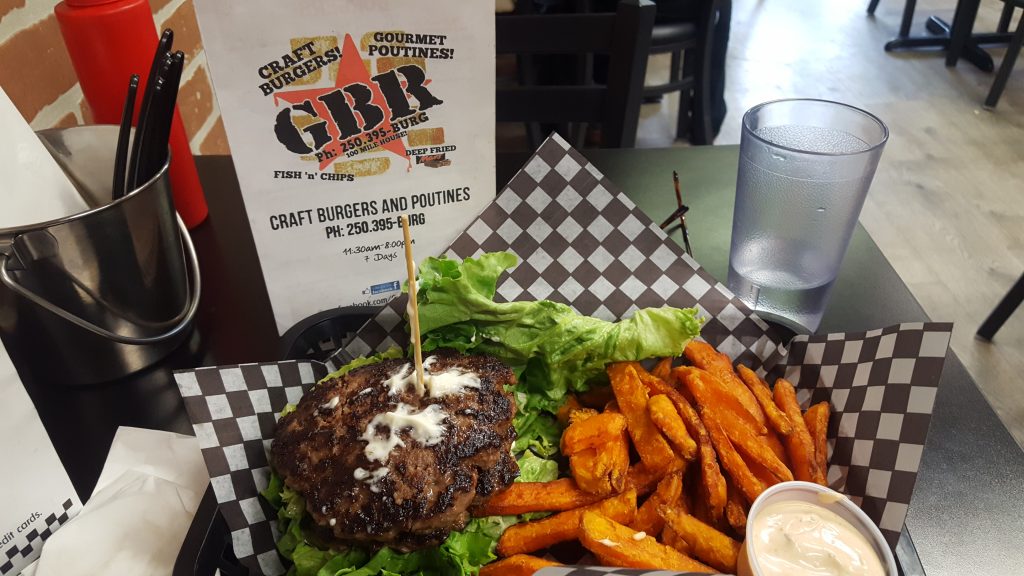