I woke up with mixed emotions.  This was to be the day I would fly back into the US.  I was not at all happy to have this wonderful adventure winding down, but at the same time after a month I was also feeling ready to get back home.

I had filed my online Homeland Security flight notification (ePIAS) (with the unbelievable amount of detail that they require for crossing the border) the night before. This morning I still needed to file a flight plan from Courtenay in to Friday Harbor (in the San Juans) where I would be clearing customs and phone the customs office in Friday Harbor because they require that you get a inspection time appointment approved by them in advance. The flight was beautiful and nicely uneventful. I intended to cruise at 2,000 ft but it seemed like the other float planes (and there were quite a few) along my route were either at 1,500′ or 2,000′ so I stayed at 1,700′ to 1,800′ and that helped a lot with traffic avoidance, gotta love those Canadian Pilots for how accurate they are.

I landed at Friday Harbor right on time and parked in the white Customs box in front of the terminal. Pretty soon the Customs agent that was dressed for a SWAT raid took my paperwork and passport and then scanned every square foot of the plane with some handheld thing that was probably looking for radiation. After that he asked what I had to declare and then he had me open everything up. He dug through all the compartments, bags and everything! All the time asking questions that I’m sure were meant to look for nervous behavior. Before he finished, a Customs helicopter landed right by and their two pilots came over and started asking a ton of questions about the plane, where I’ve been and what I was doing. I expect they were just curious pilots but I don’t think they realize that when I am in that position of not yet being admitted into the country and if they feel anything is suspicious I could be in for a nightmare, is not the time for pilot chit chat. And I did say something very polite to that effect when one of them saw the GoPro mounts and asked if there was a place online he could see any posted videos of my trip! Finally they left and I put everything back together.

I then flew over to Orcas Island airport because I know it is a great camping spot and just walking distance to town. I had Googled the night before about camping there and I noticed that the airport website had my friend Paco’s plane in their airport camping picture. But then to my great surprise when I arrived his plane was parked there in real life! He lives in the Sacramento area but the San Juans and Orcas airport is his summer nesting ground. He has been spending his summers up there for a number of years and has all kinds of friends. I got to meet and hang out with one of his friends, “Inventor Steve” who has a fascinating hanger with tons of really cool projects in it. I wish I had a picture from hanging out with the two of them in the evening in that hanger but I did get a picture of Paco in the hanger the next morning before I left. 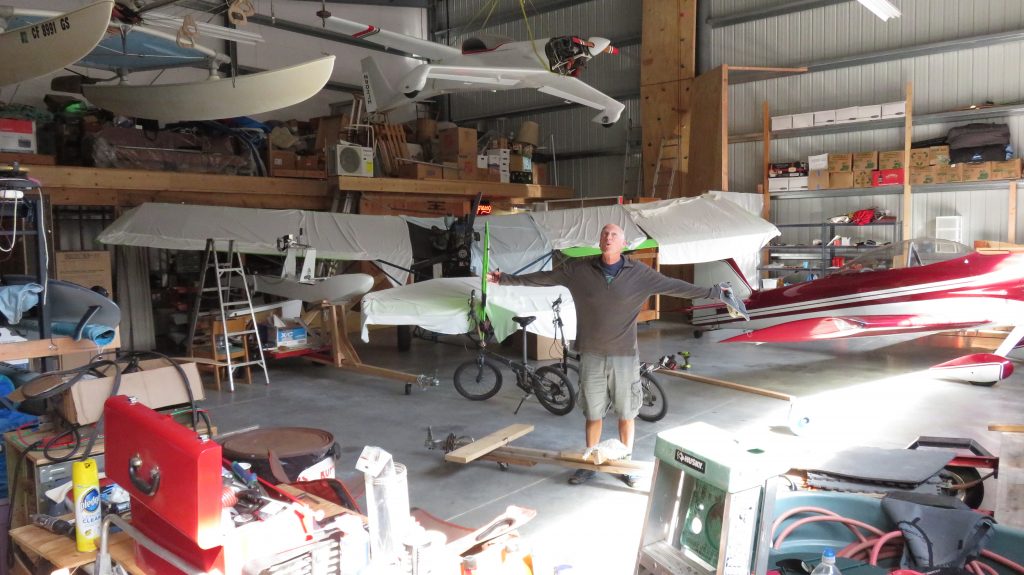 Also when I arrived at the Orcas camping area I was surprised to find out that there is a Gay Pilots group “National Gay Pilots Association” (NGPA) and that was their fly in weekend.

I walked into town for some dinner and a few breakfast and lunch items for the next day. I chose to park and camp in the asphalt parking area, I find that with my excellent sleeping pad I can be more comfortable on flat asphalt than trying to find a place in the grass that does not have little humps and bumps to annoy me all night.

Posted in Uncategorized
← Day 32, Space Needle and a Time WarpDay 29 & 30 Chased by the Wind and Breaking the Law →