I woke up before my 4:45 a.m. alarm, daydreaming about the day before and enjoying anticipation of the flight I had before me. I had looked at quite a few smoke forecasting websites the night before and it looked like I would have a lot of smoke all across Southern Oregon and Northern California stretching out over the ocean. I expected that I would have to drop down under the smoke and go along the coast but I just didn’t know how that would work out with the forecast for fog along the coast in the morning.

Just as I got up before 5:00 I was surprised to have a car pull up by the dumpy bathroom that is connected with the maintenance hangar. Next thing I know that one is leaving and another one is pulling up there and then another and then several more cars are coming in all of which are heading farther down the airstrip out of sight by some hangers. I was thinking maybe some Flying Club was getting an early start for a fly out. Pretty soon I saw 6 pickup trucks each pulling a hot air balloon trailer come out of that same hanger area. They went down to the far side of the Airfield we’re a bunch of cars were pouring into that parking area from another driveway. It looked like they would be setting up off the side of the runway and that’s all I needed to know for me to get out. Sure enough I had a gorgeous view of them on my takeoff here is a video of it!

Click Here for Video of Taking Off With Hot Air Balloons

The flight through Central Oregon was beautiful cool smooth air and the fog out along the coast and in the valleys with the sun rising was gorgeous. 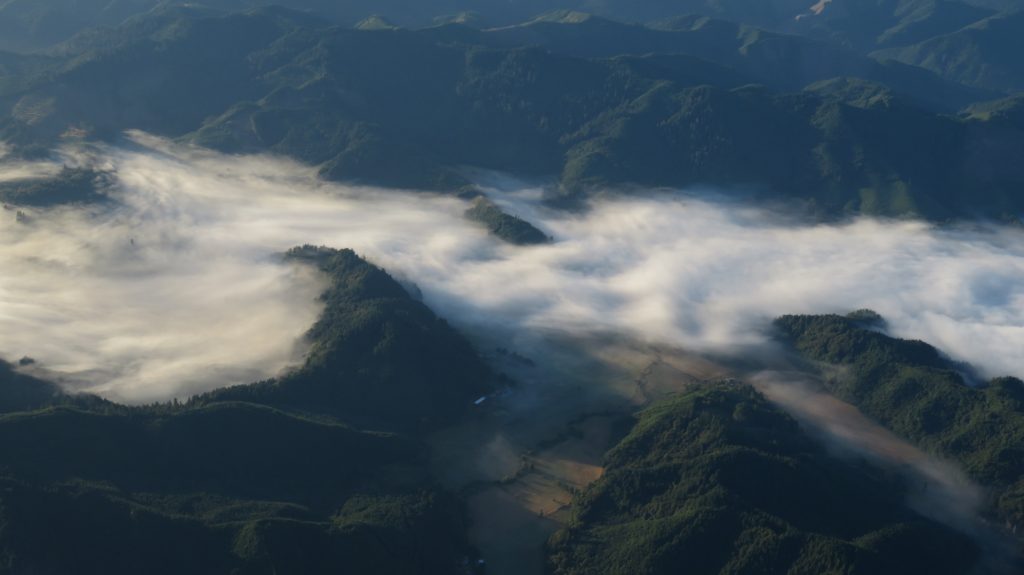 As I got farther down I could see the wall of smoke ahead of me the top of it looked to be about 9000 feet, 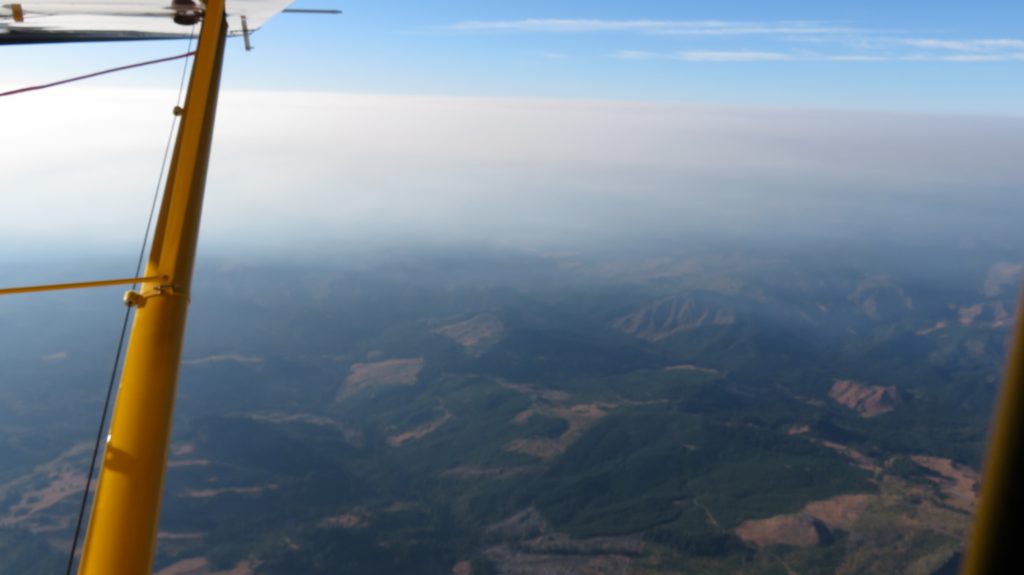 even though I could climb over that I take flying in smoke extremely seriously. I actually have a hard time believing how cavalier the pilots I have interacted with around smoke conditions feel about it. I once was at a camp out in California with about 10 other planes and in the morning when we woke up a big fire had taken off near us and we had a 300 foot ceiling under the smoke. Myself and 6 other planes decided to fly out with the intention of going down the canyon and staying underneath it. I was the only one that actually stayed underneath it. I was in radio communication with the other six planes and all of them ended up punching into the smoke and climbing in it in a mountainous area. They were not prepared and did not have the equipment to be flying by instruments. The ones that were able to climb out the top of it did not come out until 10,000 feet and the other ones flew out through the valley just following their GPS map and on instruments until they got to clear air. I stayed under it in the canyons and found my way out to clear air that way, I did at one point have to circle for a while and was considering making an offer airport landing that would involve taking the wings off and trucking the plane out but that would be much safer than running into a mountain. Also at a gas stop up through Eastern Oregon I met some other Pilots that were also going to the eclipse and they told me how they were cruising at 8,000 feet in the smoke and felt like it was somehow okay because they thought they had greater than 3 miles visibility (the FAA legal minimum) even though they could only see the ground directly below them. I was flying at an altitude (about 1,500′ agl) that would maintain at least visibility with the ground at a 60 degree angle ahead of me and if it got down to 45 degree view to the ground I would immediately do a 180 turn back to more clear air. Also I am always extremely careful to watch that behind me I have better visibility than in front of me because if I was doing a 180 towards the sun I would have much worse forward visibility in that direction. Well enough of that rant.

Out at the coastline I found I needed to be about 1,200 ft above the water to have good forward visibility of at least two miles. 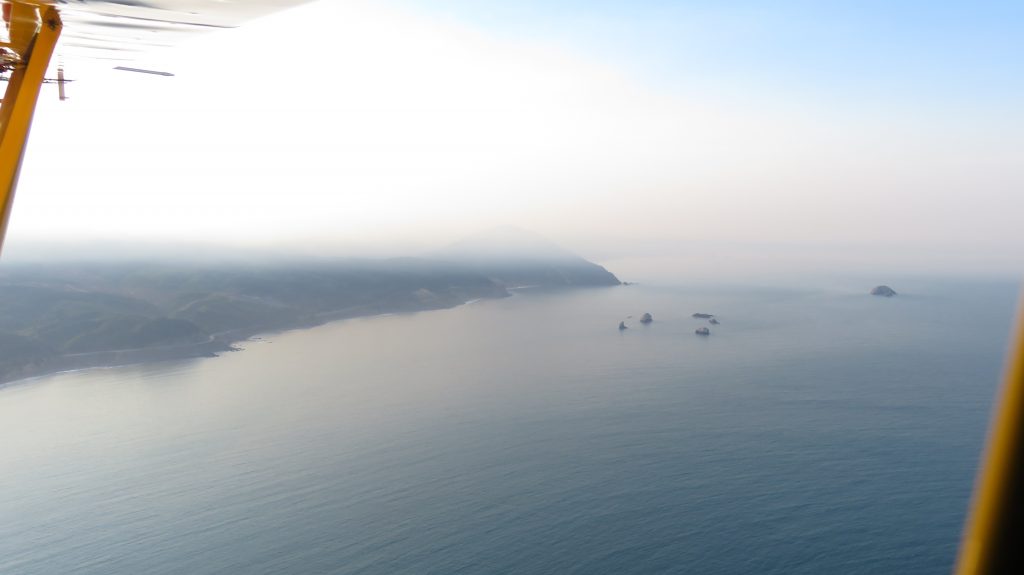 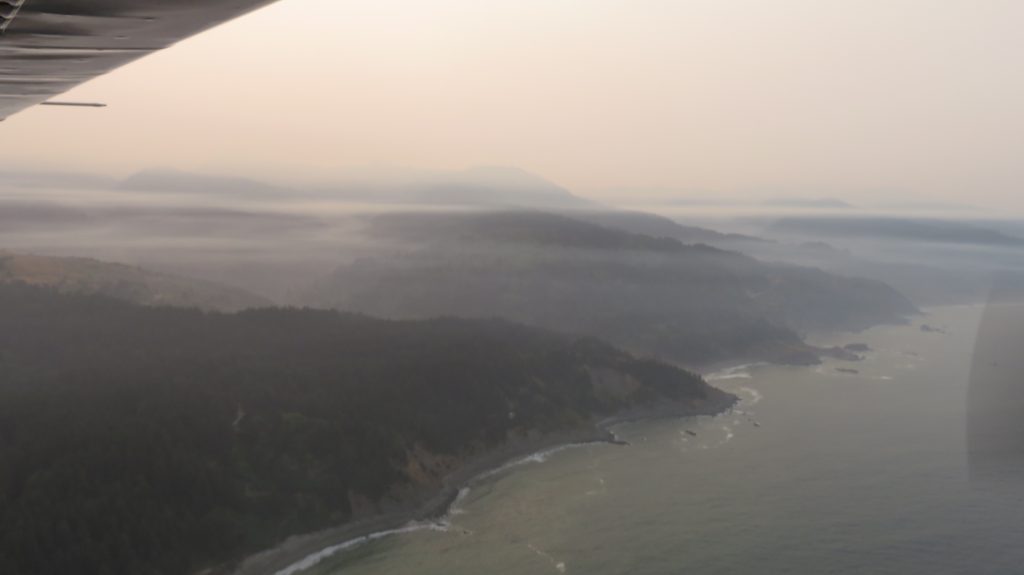 A few times there was some fog around and the smoke did get rather stratified and had some thick patches drifting in low but I kept maintaining options of airports I could go back to and land if I had to and it worked out quite well to get all the way down to Arcata.

I put some fuel in and took a rest break watching the fog bank that was sitting right at the edge of the runway and then I had a smooth flight back home to Santa Rosa.
Like everywhere else, Double Shot does draw a lot of admirers. It felt great to be home, and even better for having made the journey.
Thank you for sharing it with me.
– Douglas 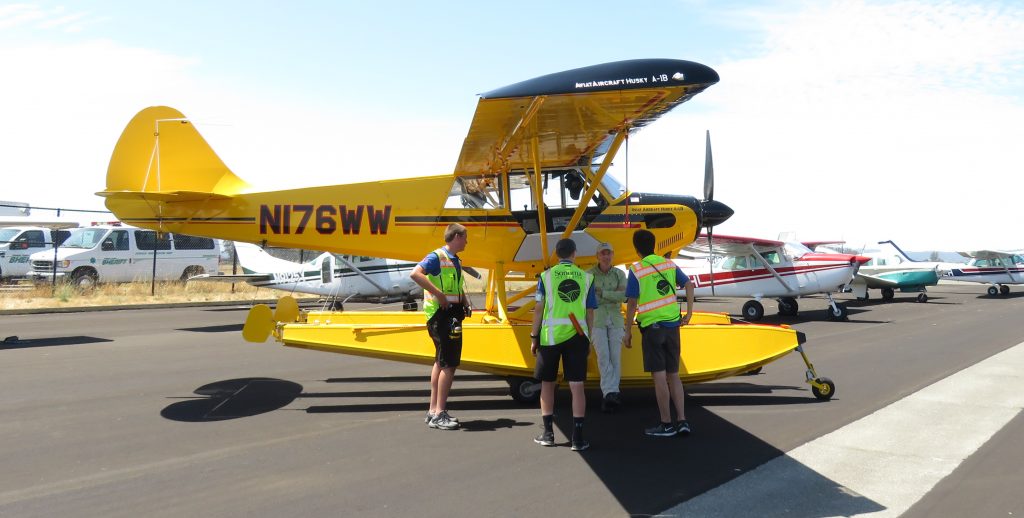 Posted in Uncategorized
Day 32, Space Needle and a Time Warp →